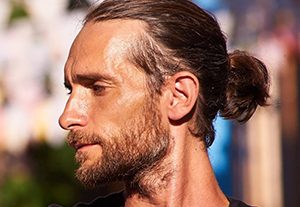 Hello, my name is Dimitar Germanov. I was born on 01/01/1975 in Plovdiv. I graduated from the English Language School there, then I studied mathematics at Cornell University in New York, USA. Over the past 20 years I have lived and traveled for a long time in about 50 countries and regions in Europe, South, Central and North America, Africa, Asia, India, Tibet.

I started doing Ashtanga Vinyasa Yoga in 2003 in Delhi and Varanasi, India due to my friend and first teacher Amit Gandhi. Later I became a student of German Garro from the Paramahansa Yogananda line in the area of El Bolson in the mountains of Patagonia, Argentina, that I visited often over the years. I began studying the sutras of Patanjali and the theory of Hatha and Ashtanga Yoga and gradually I entered into the depths of the practice. On the way to wisdom and love I was also helped by Maite Bobadiila and Milena Goleva. I specialized in workshops with Linda Munro in Paris Maira Bliggenstorfer & Liza Zogib in Italy, and Juan Pablo Capdevila in Argentina. Since 2008 I‘ve been practicing alone the 1st and parts of the 2nd series of Ashtanga Vinyasa Yoga by Pattabhi Jois. I‘ve shared my practice in different centers around the world – in Plovdiv during 2011-2012 in a center I founded, called Anahata, also in Sofia, Costa Rica, Crete, Barcelona, Co. Pha-ngan in Thailand, in Italy.

I worked three years as a teacher of mathematics and ecology in Barcelona. There, in 2004 I started studying to juggle and later I continued in Katakomben Juggling School in Berlin, where I worked with Victor Kii from Cirque de Soleil and Stefan Sing, thus specializing in juggling balls and dancing with a crystal sphere (contact juggling ). I danced modern dance in various dance academies – AREA Dansa in Barcelona, Camarin de las Musas in Buenos Aires and others. I studied the Japanese Butoh dance with Yoshito Ohno and Jean Daniel Fricker in France mime with Loco Brusca in Barcelona and Buenos Aires. I explored other disciplines and techniques for gaining awareness of the spirit through the body – Tai Chi, Alexander Technique, Contact Improvisation. Between 2009 and 2013 I worked on stage in solo and joint projects with other artists from France and Israel in festivals and theaters in the field of contemporary dance and physical theater with objects.

I believe that the road to self-discovery and love goes through bravely diving into the infinity of our body (physical, etheric and astral). This is where one can find all keys to happiness in our earthly journey.